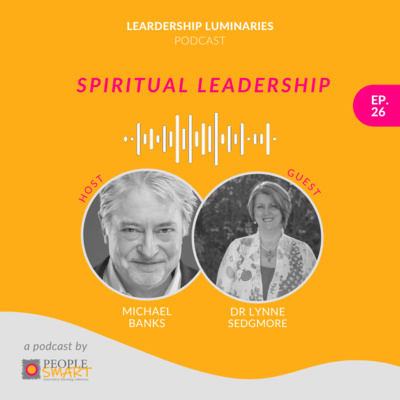 Join our host Michael Banks and guest Dra Lynne Sedgmore, a bold and courageous disrupter, as they delve into the intrigue and complexities of integrating spirituality into business and leadership.

In her new book ‘Goddess Luminary Leadership Wheel: A Post Patriarchal Paradigm’ she explores how the ‘sacred feminine’ can inform business leadership.

As a former CEO, advisor to the UK government, and board director of over twenty five organisations, Lynne Sedgmore has lived the challenges of integrating spirituality into business and leadership. She tells the story of trying to introduce love as a value into a business school twenty years ago and how that concluded. Lynne also discusses the value of exploring one’s ‘shadow’, and the ‘intersectionality’ of pressures were under, in order to grow as a leader

Spirituality and business are two words you rarely see in the same sentence. On the surface, the two seem at odds with each other. However, this is not some New Age, airy-fairy concept but a journey into the future of leadership described by someone who has had a long career of success and getting things done in the real world.

Are you curious as to how you can incorporate spirituality into your business practice?

Listen this episode with Dra Lynne Sedgmore where she shares how spirituality can be a powerful management concept for leadership that the planet urgently needs.

Lynne is an executive coach, a non-executive board member, leadership advisor and author of ‘Goddess Luminary Leadership Wheel: A Post Patriarchal Paradigm’. She was awarded the CBE in 2004, was named one of Debrett’s 500 most influential educators in the UK in 2015. Her organisations have won numerous national and international awards, including the International Spirit at Work Award. Lynne held 3 Chief Executive roles within Further Education in the UK over 17 years. She is an experienced board member – having held 25 non-executive posts. She was a member of the UK Prime Minister’s national review of public sector leadership and advisor to the 11 UK Leadership Academies. Lynne has chaired and sat on numerous national, academic and Ministerial public sector committees and advisory groups.

She is also a published poet, an ordained interfaith Minister and Priestess.