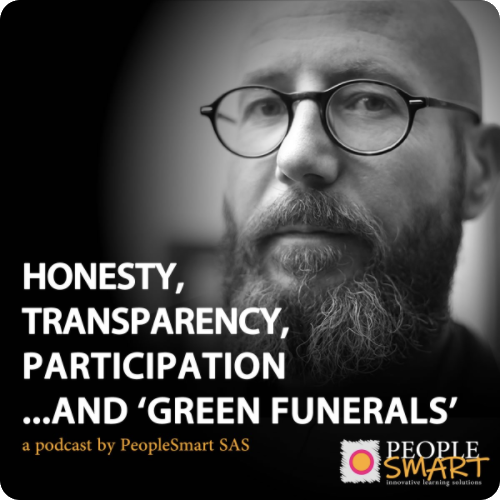 In this truly fascinating interview Rupert Callender, founder of the Green Funeral Company, shares how he has applied the lessons and spirit of raves and punk to funerals. As a pioneer in the field, and breaking from tradition, Rupert began a new approach to funerals twenty years ago when he was inspired by the natural death movement which came on the heels of the earlier natural birth movement.

Ru calls himself an undertaker (versus a funeral director) in that he undertakes to accompany and empower families to hold the most meaningful and personal of ceremonies and rituals.

Towards the end Rupert makes the connection between the qualities and skills required of an undertaker and modern business leadership. Active listening, empathy, service to others vs self, “letting go of control”, trust and authenticity. “People are hungry for authenticity” says Rupert. And as he says, “Around death bullshit goes.”

Rupert Callender set up The Green Funeral Company in 1999 in response to his own experiences around bereavement and ran it with his partner Claire up until the beginning of this year, 2021, when she left the business to take a break from death.

They both brought their experiences within the rave and punk subcultures to their work, as well as some more unusual influences like the crop circle scene. They pioneered a strip backed and immersive way of working which threw away the formality and faux Victoriana of the modern traditional funeral. Their watchwords are honesty, transparency and participation, and this they bring to every funeral they do.

Ru edited Writing on Death, and co-wrote the fifth edition of The Natural Death Handbook available directly from the Natural Death Centre, deliberately avoiding Amazon. They both did a TED X talk entitled Death, Grief, Ritual and Radical funerals, and are partners in an art memorialisation project with former KLF members Bill Drummond and Jimmy Cauty to build a 23 ft high pyramid in Toxteth with each brick containing cremated human remains. They have been described as “The best undertakers of all time by a country mile.” by The Good Funeral Guide.